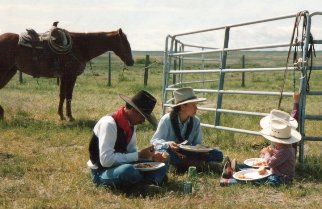 We’ve been working on some videos for the ministry facebook page. Our son, Jared, is a gifted videographer and has generously donated his time and talent to utilize many of the new media outlets that are now available. One of the videos is comprised of a very abbreviated version of Butch’s testimony. Going through some old, I mean OLD, pictures for the video, and hearing what he shared, has inspired me to write a testimony of my own….complete with overlooked details and a woman’s perspective.  If you watch the videos, it is obvious that he is much more comfortable in front of a camera or a crowd than I am, so my testimony will be in print…my comfort zone.  I am really doing this solely for myself, but you are welcome to walk with me down memory lane.

I was born……HA! Just kidding! I won’t begin that far back, but just to say that I had a pretty uneventful childhood. My mother stayed home with us three girls, and my dad worked all the time so she could. I was the child who was naturally a man-pleaser and was very easy disciplined. I avoided conflict at all cost and was always looking for acceptance and popularity. We were not raised in church, though I did periodically attend the Baptist church that was just across the road from where we lived…probably more for the social aspect of the youth group than anything else. Thinking back, I believe that I did have a heart for God, but He was not a priority in my life. I met Butch at a rodeo just before I turned 16.  He was 22. Everything drastically changed from that point on. I dropped out of all my high school activities, abandoned my friends, and he became my life. I am convinced that meeting him at such a young age kept me from ever sowing the wild oats that were quickly sprouting in my heart. Though we were both raised in metro Atlanta, we grew up with horses and shared a love for all things western. We married a week before my 18th birthday and immediately headed West to fulfill our cowboy dreams. Montana’s Canadian border was a stark contrast to our Southern roots, but we were two greenhorns who embraced the cowboy way of life with gusto. By a divine appointment, we soon met Dale and Karla Camp who took us under their wing, and we were taught by the best in the business. Karla had a passionate love for the Word unlike anyone I had ever known, and that sparked a real interest in me. I quickly became a diligent student of the Bible which, of course, was life changing. With typical cowboy mentality, we grew discontent at one ranch and moved to another, always in search of greener pastures, better horses, and for me, nicer housing.  We moved so much that one room in our ranch house was designated just to hold the packing boxes that we knew we’d be using shortly. Before the boys were born, I spent some days working along side of my man and other days alone in houses in bad need of remodeling (to put it nicely) with no television, no telephone, no money, and hours from the closet town. We began to learn to depend on each other and on the God we knew of, but didn’t really know.

On labor day weekend in 2010, we hosted Jared’s wedding at our home. As I looked around at the beautiful setting, I remembered the times I had cried out to God with all my heart asking Him to provide the way for us to have a real house. I was overwhelmed with gratitude. Carson still comes and goes between his horse training gigs, but basically we are down to one dog and Butch and me. We still live by faith every day, and the narrow road is still filled with obstacles, but God continues to prove Himself faithful. Our passion to share the Truth of the gospel so that many can be delivered from the bondage of the old man and be born again after the likeness and image of Jesus is stronger than ever. When I am having doubts, all I have to do is witness the anointing on Butch’s preaching, and I am convinced once again that we are in His perfect will.  If I had known at the beginning what the last 19 years of full-time ministry would involve, would I have jumped in? Truthfully, I don’t know. But I feel like Peter did when many people deserted Jesus and the Lord asked His disciples, “Do you also want to go away?” Peter’s answer was, “Lord, to whom shall we go? You have words of eternal life. Also we have come to believe and know that You are the Christ, the Son of the living God”.